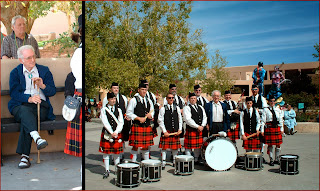 Several years ago, I was visiting friends in New Mexico, USA and they took me to a museum on a weekend afternoon, where they were donating their time to help prepare for the evening's symphony event, which we were scheduled to attend. At that time, I was still in need of a cane to move about and opted to wait outside, in the shade, while they went inside to prepare. I found a nice location under a tree and joined a gentleman of mature years who was already enjoying a comfortable bench in the shade, and who offered me a quick smile and nod, before returning his attention to the pipe and drum group warming up in front of us. Within a minute or so we had struck up a conversation, as people often do, when not immersed in their iPods/iPads/iwhatevers, and he asked me if I enjoyed the pipes, to which I replied that I did and very much so. After some discussion, and comments on the warming-up of the performers, he asked me if I had a favorite, to which I replied:
"When I was a boy, I heard the Black Watch perform Amazing Grace, and I have never heard it performed better than with bagpipes."
"Would you like to hear it, now?" he asked.
His name was Patrick and it turned out that he was the driving force behind the organization and was an old piper, himself. After a quick chat with the Pipe Major, they began to play my favorite. I was stunned and very moved, not only by their expert rendition of this wonderful work, but also by the kindness and graciousness of this man I had just met, minutes before.
During the time we sat together, speaking of music, bagpipes and single malt whisky, I learned a great deal about how the bagpipes came to be in Albuquerque and even more about this truly unique individual. Teaching the music was as important to him as playing it, which is why there were several generations present who could attest to his influence. At the end of their public performance, it was he who asked the performers if they would pose for me and I was very pleased that we were able to convince him to join in. The woman behind him and to his left is his daughter, Patricia.
It was a rare afternoon and the kind you only can have when your head is up and you are participating with your surroundings. Technology can never replace the experience of meeting new people and engaging them in real conversation.
If you are ever in the Albuquerque area and decide to take one of the tours around the Native American reservations, be prepared to see young Native American children coming out of their homes with the bag under their arms and their pipes high. It's the legacy of a very interesting man.