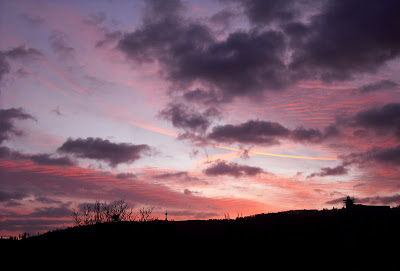 The image above was taken from my bed at dawn, yesterday, my last day at the hospital, in Darmstadt, Germany. It seems that the gods were as happy as was I that I was going home to continue with this new challenge in which I find myself. However, the colours reflect the hope that one can have when confronting a health hiccup, and I feel confident that a resolution is in the near future. Enjoy the picture, and I have enjoyed reading the notes and comments about Impaired Ocular Acuity and Other Demented Synapses, from readers around the world. Spread the message!
Posted by KJ at 2:31 PM No comments:

Ebay and Politics, the Perfect Solution?

I just had to do it. The target was too tempting, and the idea too much fun for me to turn away from it. Kind of like watching a train wreck, actually. Read and enjoy.

Meg Whitman Goes to Sacramento
When I learned that Meg Whitman, of Ebay fame, was going to run for Governor of the fair State of California, I was at first surprised. But, then it hit me: it's perfect! Not even David Rockefeller could have dreamed up this one - or maybe he did, but that's another topic for discussion.

Think of it: instead of the current system of back-room bidding for political favors and the secretive purchasing of whole groups of senators and congress(wo)men that is now in place, corporations like Cigna, Exxon and the rest could do it right out in the open. Just like a real auction! How cool would that be? Then, they wouldn't have to hide the stealing and lying, which take up so much of their valuable time. And, Cigna and the other bloodsuckers of their ilk wouldn't have to spend 200+ million a year on 'political donations' (or, in the vernacular: bribes) to get legislation passed that basically screws Californians. Politicians could come out of the closet, finally, and post a Starting Bid and even a Buy It Now price, AND they could make it a Reserve auction (no relation to the Fed intended, although we can be assured that they would participate, as usual), to ensure that they get the top dollar that they are worth.

This could also return at least one state of the USA back to a sense of actual Democracy, as well. Yep, sure can. In an auction, anyone can bid - even the citizens! How novel is this? Californians would then actually be able to enter the bidding process for their elected officials, instead of being shut out of the game. All bidders welcome, is the Ebay philosophy, right? Imagine actually getting the attention of a politician and having them do what you want them to do. I know, it's a stretch to form that thought in your mind, but give it a go. It's really fun, when you get into the concept.

One of the obvious downsides to Meg's business philosophy going to Sacramento would be the lack of customer support. Then, of course, there are the constantly changing rules that are motivated by the sole credo of 'Profit, Profit.' She has stated that the would like to loosen the regulations on the environment for the state: Within months, Sacramento will be handing down new rules to implement AB32, the far-reaching law to restrict greenhouse gas emissions. Signed by Gov. Arnold Schwarzenegger in 2006, AB32 may have been well intentioned. But it is wrong for these challenging times. With this ongoing economic crisis, the governor has the ability to issue an executive order putting a moratorium on most AB32-related rules. I urge him to do so. And if he does not, I will issue that order on my first day as governor. Yes, I used the colour green to highlight that message as a bit of irony.

After all is said and done, Meg states her ideals quite clearly: "California’s government should be run more like a business..." This is just what California has been waiting for: the corporate mentality of efficiency, greed, self-promotion and political manipulation of issues, regardless of its effect on the populace. Oh...wait...that's how it is now! My bad.

The one thing I would look forward to, if I lived in California, and Meg wins: Feedback. Think how much fun it will be to leave appropriate feedback for those politicians who do not perform in the spirit for which they were purchased! The most obvious benefit is keeping those politicians in line whom we did win at auction. And, the other benefit would be to watch and see which of those politicians won by corporations failed miserably for their winners. They would be good investments for the future, oui? We might even make the name of this auction process Obey!

I may have to rethink the apparent inconceivable nature of Meg and her profits-or-die mantra going to Sacramento. There may, after all, be a great logic behind it all, and actual benefits to the citizens of that fine state. Of course, that would mean that they would actually have to do an auction to buy politicians. Without that benefit it is doubtful that there will be any change in business, in California, when and if Meg gets the voters' nod.

You are in our prayers.

Quotes from Meg's written texts borrowed from this website, under the Fair Use doctrine: http://www.megwhitman.com
Posted by KJ at 6:39 AM No comments:

Summer is upon us. 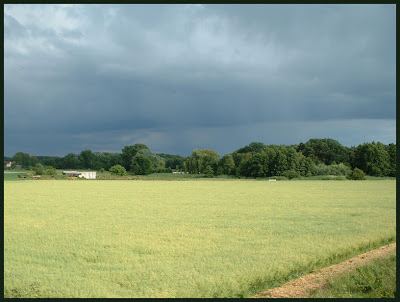 I must admit to being a bit sidetracked, this summer, with other tasks keeping me from my writing. Numerous activities of a more mundane nature have assailed me and required my attention, and I have been taking long walks in the country to ease my mind and repair my soul. The photo at the top is from one of my jaunts, and oui, I was caught in that storm, but managed to find cover and enjoyed it immensely. I will take some time away from all of that in the way of a short holiday with a friend visiting us from the States, in the second half of this month. I do hope to get back to France for a bit, and I might even break into my strict diet for some pain, fromage et champagne! I do hope everyone is having a fun summer (and winter, for my Aussie compatriots). Play safe and keep smiling! 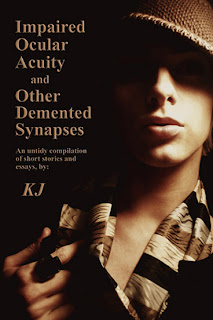 If you have wandered through these pages, it is likely that you already know that Impaired Ocular Acuity and Other Demented Synapses is now available. It was a long process to bring it to this stage, and I have learned much along the way. I do hope you will take a moment to browse the previews offered on this site, and if what I have shared moves you to do so, order a book or two.

Enjoy, and feedback is always welcome.

Good news, and an apology...

I must apologize for not posting excerpts from 'Not For The Moon,' and activities have kept me too busy to do so. There is also good news: 'Impaired Ocular Acuity and Other Demented Synapses' is finally being printed, in the UK, this week! I should have the books by the first week of May, if all goes well, an outcome which I anticipate. The page for purchasing books will be put up as soon as the books are in stock.

I also have good news for international readers: shipping from the studio in Germany to any country outside of Germany will be 6 Euros, and 4.5 Euros for Airmail in Germany. Not bad, eh? Yes, the book will be shipped in an appropriate cardboard container, much like Amazon uses. We do want the book to arrive unscathed, yes?

If you want to be alerted when the books are available, send me an email at: kj@kristophe.com and I will put you on the notification list.

Thank you for your many notes of encouragement, and support.

Yes, it is, and I am expecting what I hope to be the last proof before I print IOAAODS. It should arrive this week, or next. Cross your fingers for me. I have updated the hoped-for release times for 'The Other Lamb' and 'An Atheist In A Foxhole,' and I will be posting excerpts from 'Not For The Moon' later this month. This fourth book is scheduled for the first quarter of 2010, if all goes according to plan. Let us hope, yes?

I was recently asked how I juggle several books at the same time, and I can only say: I haven't a clue. I do not use an outline, nor do I start from page one, the title comes to be while I am constructing the story and I have never had writer's block at any point. It would appear that I am truly fortunate that some entity in this universe has blessed me with this ability to handle multiple tasks, and if I were to add the other projects, including The Boys of St. Precocious Academy, well......let's just say that Scotland needs to keep their distillers hard at work to lubricate my beleaguered talent. It wouldn't hurt if the cookie-makers kept up with those little shortbread things, either. They do help, I must admit.

Thank you one and all for your continued good wishes for my speedy recovery, and I wish you all the best of health and pleasures.

I have returned home, to continue my recuperation, and while I am doing so I shall continue writing.

The latest proof has arrived, and I will review it next week, when I have the courage to open the package. I know they did not fix the cover colours, yet, so that disappointment will have to be addressed. This process has been so long and drawn out, and I just hope it will end soon, so that I can focus on the other books. I am not cut out for the minuscule details of editing, I assure you. Perhaps a single malt and a shortbread will bring the temporary cure I need.